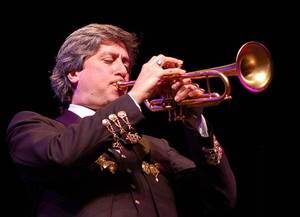 Dr. Nevin earned his Bachelor’s, Master’s and Ph.D. in Music Theory and Composition from the University of Illinois, Arizona State University and UC San Diego respectively, and he is currently Professor of Music and Director of Mariachi Activities at Southwestern College in Chula Vista, CA, where he devised and is now offering the world’s first college degree in mariachi music, conductor of the Southwestern College Symphony Orchestra, and he was a Faculty Associate at Arizona State University in the 2012-13 school year. In 2011 the Mexican government presented him with the first “Award for Arts and Culture” for his work promoting Mexican music abroad. In 2008 he was named “California Multicultural Music Educator of the Year” and also accepted the position of Director of Youth Music Programs for San Bernardino’s Sinfonía Mexicana. In addition to countless television, radio and print interviews, Dr. Nevin has been featured in the documentary films “In the Name of Mariachi Music”, “Viva el Mariachi”, and The History Channel en Español’s “El Mariachi”. His first book, Virtuoso Mariachi (University Press of America, 2002), was called “A major milestone in the history of mariachi music” by the Tucson Citizen newspaper, and he has written a comprehensive set of method books, Mariachi Mastery (Neil A Kjos Music Company, 2006), that is used to teach mariachi music in classrooms across the United States and Mexico.

Please contact us at info@latradicionmusic.com to schedule a consultation for your school program or to have Jeff as a part of your conference or judging panel.